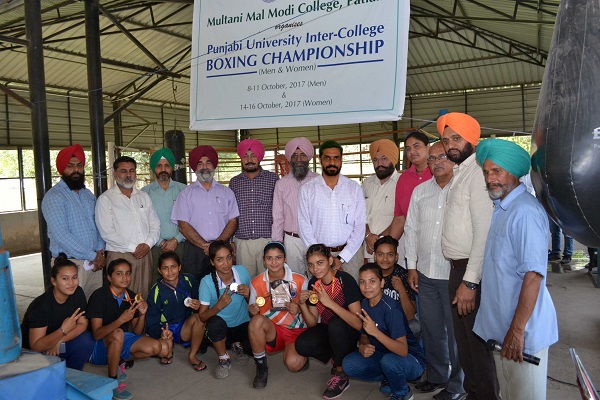 Three Day Punjabi University Inter-College Boxing (Women) Championship hosted by M M Modi College, Patiala concluded here today. Principal Dr. Khushvinder Kumar was the Chief Guest on the occasion. He urged the participants to appreciate the role of sports in making the society tolerant and a happy place to live in. He congratulated the Sports Dept. and sports persons for winning the tournament.

Vice Principal Prof. Nimral Singh welcomed the Chief Guest and other dignitaries. He thanked the Officials of Punjabi University, NIS, Patiala, Punjab Sports Department and College Medical Officer Dr. Kewal Krishan for the help they extended in the organization of the event. He said that sports play an important role in improving the physical and mental health of the youth and keeps them dedicated in furtherance of their careers. Harpreet Kaur of M M Modi College was declared the best boxer of the tournament and Amandeep Kaur of ADC Mastuana Sahib was declared the best looser of the tournament.

Principal Dr. Khushvinder Kumar congratulated Prof. Nishan Singh, Head Sports Department and Prof. Harneet Singh and Prof. Mandeep Kaur for this achievement. Large number of students and teachers from other colleges were there to applaud the performance of the participants.